Following our reports on a series of exposes by the Cypriot paper Politis detailing how the Cyprus government issued Malaysian fugitive Jho Low with a passport in 2015 at the height of the 1MDB affair much has happened.

The Cypriot government has now announced they will be annulling the passport and reviewing their wealthy immigrant programme that opened doors to the fugitive.

On the other hand, the company cited as having been behind the soliciting of the passport and residency for Jho Low, the well known ‘citizenship and residency agency’ Henley & Partners, has issued furious denials to a number of Malaysian and other news outlets over their alleged involvement. Here was their statement, widely quoted:

Henley & Partners was not approached for any comment on the story by any media organisation in advance. We have not therefore had the opportunity to engage with the articles or the “evidence” presented, which has been taken entirely out of context to fit a narrative that does not represent an objective assessment of the situation.

Contrary to what has been stated in multiple articles, Mr Low has never been a client of Henley & Partners. Whilst he approached Henley & Partners’ in 2015, the firm declined to accept Mr. Low as a client. It is therefore false to state that “Henley & Partners helped Jho Low acquire Cypriot citizenship.”

Over the past twenty years, Henley & Partners has invested significant time and capital in creating a corporate structure that is wedded to best practice governance and the highest levels of due diligence, even before passing a client over to the consideration of a sovereign state….”

€650,000 Commission on Jho’s Property Purchase Was Paid To Henley Estates

However, Politis this weekend indeed produced “evidence” that observers might consider to be pretty compelling in the form of an invoice of €650,000 euros made out to a company named Henley Estates Limited into a bank account in Malta, stating that it was in consideration for the purchase by Jho of his €5 million property in Aya Napa.

Henley & Partners has a major presence in Malta, which is at the centre of much of the ‘citizenship and residency business’ and its website announces a clear relationship with an outfit named Henley Estates Limited, given a key aspect of obtaining residency and passport status is property. This is what it says:

The acquisition of real estate abroad is an important component in residence and citizenship planning. However, it requires careful and professional attention. Every day, individual clients, as well as other law and consulting firms worldwide, rely on the advice and assistance of Henley Estates, an affiliated group company that is specialized in this area.

Wealthy individuals and families can enjoy considerable advantages, asset protection, and tax savings by intelligently structuring their international acquisition and holding of real estate. Henley Estates provides professional advice that is essential to the purchase, structuring, and sale of real estate worldwide. This involves national property law, tax law, and the highly complex area of international private law. These services are particularly relevant to clients who are resident or domiciled in one country and who would like to acquire real estate in another country.

Through Henley Estates, you have access to a unique, worldwide network of specialist lawyers, tax consultants, investment advisors, and other professionals who are experts in their fields. The combined expertise of these professionals will provide you with excellent advice and service. [Henley and Partners] 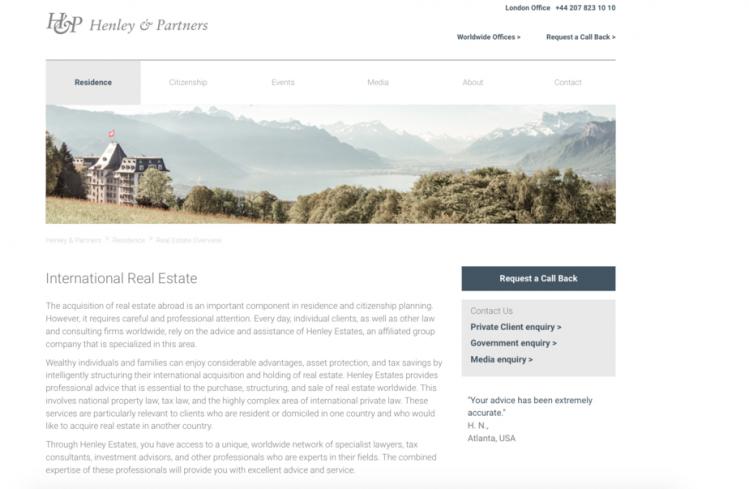 So, it would be useful if Henley & Partners could confirm if the payment went to its affiliate of that name and if so elaborate on how the matter has been “taken out of context”?

Sarawak Report would also like to know if Henley & Partners continues to uphold its claims that it ‘rejected Jho Low as a client” when the published invoice to an apparent affiliate states the company was paid the 13% commission on the purchase of his property, an investment that was inextricably linked to his successful application for Cypriot citizenship and a passport?

The online version of the article has yet to publish the invoice, however it is available in the print copy of the paper. The money is clearly made out to Henley Estates Ltd, which the Cypriot newspaper alleges is indeed an affiliate of Henley & Partners: 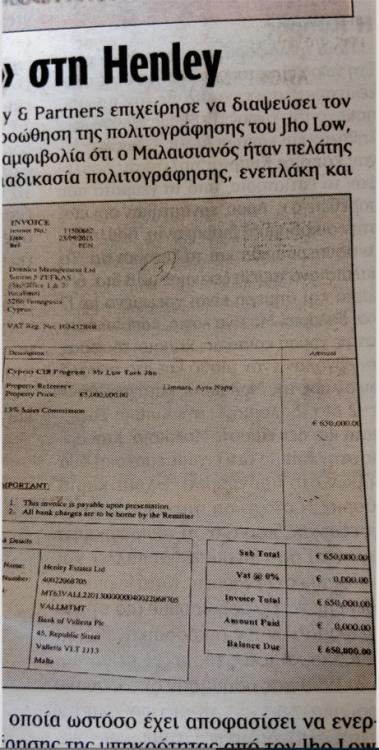 This is how Politis describes the transaction (translated from Greek):

The “commission” paid to Henley

Although Henley & Partners sought to issue a denial against P [Politis] over its involvement in promoting the naturalization of Jho Low, the figures leave no doubt that the Malaysian was its client. In addition to the naturalization process, Henley was also involved in the sale of the villa in Ayia Napa. As disclosed by P on Sunday, Henley Estates Ltd received a 13% commission (650,000 euros) on the sale of the 5,000,000-euro real estate remittance deposit to the Bank of Valletta in Malta not before but one day after the passport was issued (23/9/2015). The date raises additional questions, since on the basis of the investment program the investment precedes naturalization and the issuance of a passport. The question should be answered by the government, which has however decided to launch the process of deprivation of citizenship by Jho Low, who has no idea where he is from 2015. His latest move was recorded on September 29, 2015. , when he left Kuala Lumpur Airport. [Politis – translated]

The bald statement on the evidence by Politis

Perhaps Henley & Partners might like to refine its denial or state if the documents published by Politis are ‘fake news’?

Meanwhile, a study of Henley & Partner’s company filings have produced some as yet unpublished but highly interesting further apparent links between this citizenship company and the powers that be in Cyprus, who are now struggling with a growing scandal over the island’s passport trade in the wake of the revelations about Jho Low.

The Archbishop of Cyprus is already under pressure having written two letters supporting the issuing of the passport to the fugitive, apparently in return for a €310,000 payment in two cheques made out to his archdiocese on the day after Jho received his citizenship.

Now researchers have contacted Sarawak Report to point out a further connection between Henley & Partners’ apparent activities in Cyprus and one of the island’s most prominent political figures.  Under the passport for investors scheme they say an accountancy company named Fidescorp Services Limited is recorded as having acted for over 100 investors.

Henley Estates Cyprus Limited, originally set up in 2013 by Yiannos Trisokkas, who is also the named Cyprus representative of Henley & Partners as featured on their website, has according to the company research now changed its name to E.T.A.G. Consulting Ltd, which is also presently managed by and shares an address with Fidescorp Services Limited.  The Director of Fidescorp Services Limited is Savvas Poyiadjis, married since 2012 to the daughter of Demetris Syllouris, President of the House of Representatives since June 2016. 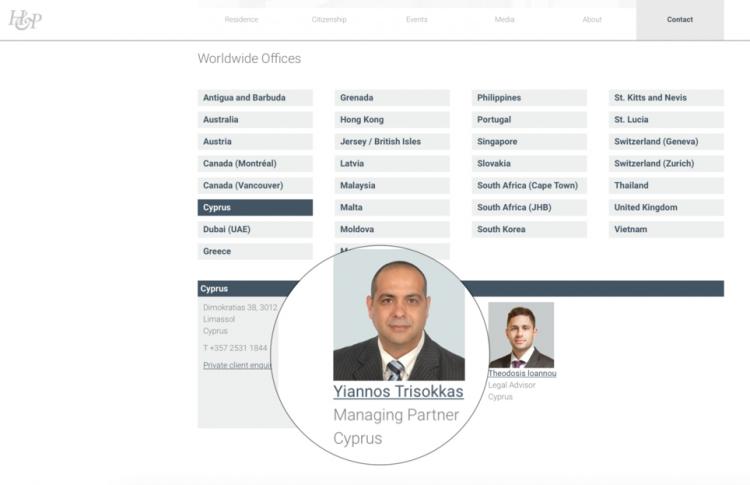 Henley & Partners’ representative in Cyprus Yiannos Trisokkas established Henley Estates Cyrprus Limited, which was then renamed E.T.A.G. Consulting Limited with the shares transferred from himself and the Maltese based Henley Estates Holdings Ltd to an outfit called called S.P.F. Nominees Limited. The son in law of the Cyprus Speaker of the House of Representatives is an ultimate Director of that company which shares an address with his own Fidescorp Services.

It raises questions as to whether Henley & Partners has been forwarding clients to the business of a politically connected person in Cyprus, given that this controversial passport business depends entirely on decisions made by the government of the day in places like Cyprus, Malta, St Kitts & Nevis and other mainly island entities, who have introduced passport schemes that have been heavily used by the clients of Henley & Partners.

According to a report by a recent UK Parliamentary Committee, Henley & Partners has made tens of millions of dollars in the process, so clarification and transparency on these matters apparently involving politically connected and influential decision-makers when it comes to the issuing of passports is now pressing.