For two weeks it has been clear that ‘PM8′ does not hold the majority of MPs. Nevertheless, it would appear that push-back continues to reverse the figures.

Having used Covid as an excuse to suspend Parliamentary Democracy in Malaysia, the minority administration now stands accused of seeking to lockdown the country (or at least Selangor) to prevent the man who does hold the majority (Anwar Ibrahim) from meeting with the King, as finally planned for Monday.

Sources have informed Sarawak Report that the current prime minister and his informal deputy, Azmin Ali, have been aggressively lobbying figures at the Ministry of Health and from the medical hierarchy of Malaysia to proclaim that the current situation merits a return total lockdown – by Sunday night.

Clearly it does not, and just as clearly the motives behind the desire for sudden lockdown are entirely about political survival – for ‘PM8′ and Azmin Ali.

As the Director General of Health accurately announced on Friday, the surge of cases in Malaysia are in line with the global spike in cases.  Although, thanks to a rigorous regime already in place, those cases are negligible compared to societies with freer movement.

Of the 287 new cases recorded on Friday almost half came from a single prison.

So, it is a worrying trend for Malaysia at a time of major global up-tick, but not enough to merit a total return to mass self-isolation, say the experts …. and certainly not worrying enough for the PN/’PM8′ sporting fraternity to consider cancelling their planned weekend of convivial elite golf at a luxury East Coast resort, until the last moment as their presence in KL became urgent. 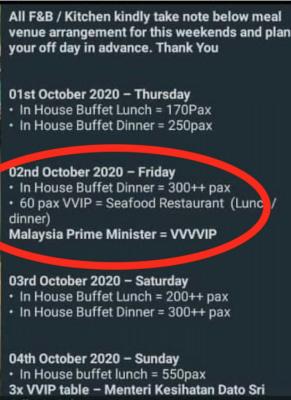 Groundhog Day? – “VVVVVVIP” PM of Malaysia was ready to indulge in a golf weekend and social event … whilst preparing to announce that Covid Lockdown is needed once again?

It appears from social media that the PM had planned to take the opportunity of Friday afternoon to head out to the highly extravagant event funded by a Taiwanese business interest, in order to thoroughly enjoy himself playing golf and then mingling at dinner with hundreds of others at the super-luxurious Lotus Desaru Beach Resort.

The game and social jamboree is due to repeat over again on Saturday and Sunday.

Perhaps as a result, Muhyiddin and his deputy are said to be fuming at the announcement by Dr Noor Hisham Abdullah that, from a medical perspective at least, the general health situation merits heightened caution but no extra lockdown measures at this point of time – given that their plan is said to have been to announce the lockdown on Sunday evening when they got back.

It is for this reason, Sarawak Report has been advised, that an alternative strategy for implementing the lockdown was hurried into place, as announced late on Friday with the statement that a political meeting will be called on Saturday – chaired by the prime minister as opposed to doctors – to determine if Malaysia needs to be suddenly plunged into “stern and immediate’ lock down action.

“Tomorrow, PM himself will chair a special Covid-19 meeting… may there be stern and immediate action tomorrow,” [Muhyiddin supporter, Annuar Musa] tweeted this evening.
Today’s Covid-19 number is the highest new infections recorded in a single day to date since the virus outbreak in the country, surpassing the June 4 statistic of 277 cases”.

the politician added, whilst failing to highlight the point made by the Director General of Health that half of those were contained within a single prison. 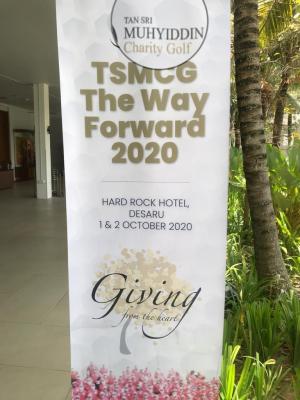 Given that the last minute decision has clearly forced ‘PM8′ to abandon his weekend of golf, he must be simply fuming at the change of plans.

However, high-wire politics clearly necessitate some sacrifices and not so subtle strategies.

Moo and his team are equally known to have recently raised widespread eyebrows by brazenly courting the King himself with offers to re-start a power producing project (IPP) for the East Coast states, originally believed to have been fondly supported by the ruling families of the region.

The PH government had axed those plans.