The article below was originally published in 2018, but was referred to in court this week as the Prime Minister of Singapore continues to pursue a legal action against a private citizen who mistakenly posted on Facebook an erroneous online article by an anonymous third party.

The case is remarkable in that it is singularly rare for a sitting prime minister to pursue a defamation case, whilst simultaneously employing the full apparatus of the state to enact criminal proceedings against the same individual over the same matter.

Sarawak Report questioned the decision at the time and stands by its remarks, now that the case has made it all the way to an open court.

Rightly in a democracy, state officials are by received judgement and understanding expected to have a “thicker skin” than normal individuals when it comes to criticism and attack, given they represent the government which ought to be held to account and subject to opinion in any democracy.

As a counter-balance, these same officials are protected by the formidable apparatus of the state when it comes to defending themselves, as in this case.

So, why did the PM of Singapore decide to take matters so much further into the private sphere of civil law far in order to kick a small man down and can any judgement in this case serve to raise confidence in Singapore’s democracy?

Sarawak Report stands by its original view that this case involves an accusation that had already been de-bunked at source (in this case there had been a misrepresentation of Sarawak Report) and that the decision to pursue a private defamation case was ill-advised – politically, if not also legally. 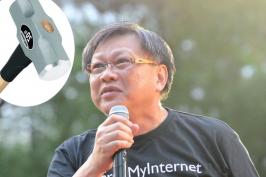 Round about 7th November [2018] a Singapore citizen named Leong Sze Hian shared an inaccurate and apparently libellous article on his Facebook site.

The article, written by an anonymous blogger believed to be based safe in Australia, erroneously claimed that the editor of Sarawak Report had told journalists that the prime minister of Singapore was ‘next on the list for 1MDB investigators’. 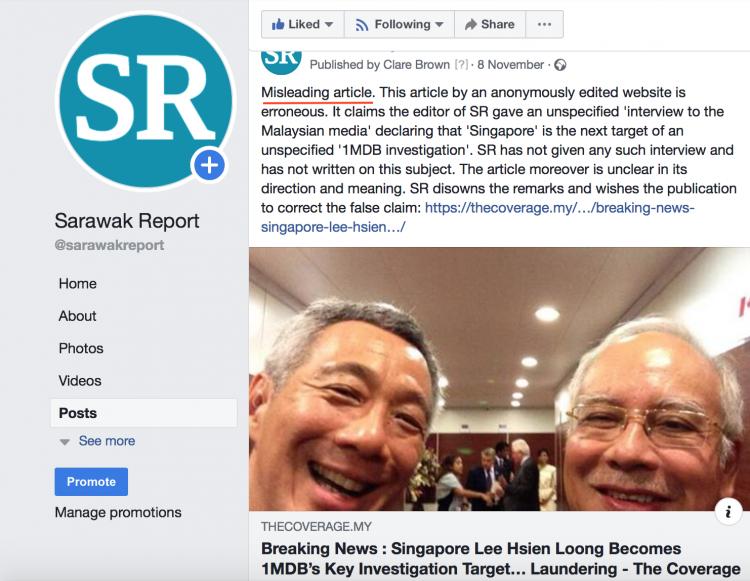 It wasn’t true, since Sarawak Report had not said that and indeed the claim was so unspecific as to be meaningless. The editor was forced to issue an immediate public disclaimer on Sarawak Report’s own Facebook site to point out they had been falsely quoted and had never publicly said that the prime minister of Singapore had transgressed over 1MDB: to the contrary, Singapore had acted to trace and punish transgressors in the island territory.

Yet it was not surprising that in the meantime third parties had picked up on what on the face of it appeared to be a bit of a bombshell article pointing a finger directly at another head of state.

Certainly, if the article had appeared in an established and reputable publication (the sort that checks its facts) this would have been news to pass around.

However, it is a reality of the world of new media that some less professional platforms can for a while be treated as if they were to be similarly believed.  Mr Leong seems to have been one of several who fell for it and shared the link under the impression that the article was carrying genuine quotes from the journalist who had unravelled genuine stories on 1MDB. A total of 18 of his followers read the link (which he had posted without comment) while it was on his Facebook site.

He was to soon be made rudely aware of his error.  Not only did Sarawak Report issue its own strong denial but he received an email from an official body named the Media Development Agency of Singapore warning him that he had posted a libellous and untrue article implicating the prime minister in criminal activity.

These sorts of accusations may fly around social media all the time in most other democratic countries – the President of the United States, for example, is a frequent perpetrator of accusations of criminality against his opponents and re-Tweets untrue articles all the time. However, those in charge in Singapore are notoriously thin skinned when it comes to mudslinging and have numerous laws in place to counter potentially ‘destabilising’ results.

In an interview this weekend Mr Leong told Sarawak Report that the warning email immediately appraised him of his error in posting the link and that he therefore immediately and willingly removed the link and apologised, acknowledging that the article was untrue.[update: The Ministry of Communications and Information has denied to Sarawak Report that they received such an apology].

However, it turns out his troubles have not ended there, because he has now found himself singled out by the legal team representing the prime minister himself, who have launched a private civil suit against him for libel. Without doubt, attempting to defend or settle such an action will ruin Mr Leong – since the PM’s legal team have apparently made clear that they are after substantial financial damages.

It is at this point that Sarawak Report questions whether the legal advisors to the prime minister are serving their client or society in the most appropriate way, employing as the saying goes a sledge-hammer to crack a nut that has already been broken open by earlier more subtle (if sinister) actions of the state?

More particularly, why has this man, who was not the original perpetrator of the article; who was plainly misled like many others and who has already removed the link and apologised, been singled out for this targeted and ruinous retribution from the most powerful person in Singapore, who has already made use of government machinery to sort the problem out?

It would appear an injustice against Mr Leong and to do no favours either to a wealthy and powerful leader, who ought to be able to shrug off such criticism as the normal stuff of office.  The PM’s lawyers should consider how the majority of people will judge this action if it continues to grind through the legal process, compared to a compassionate and magnanimous acceptance of the apologies the Facebook activist has sought to offer?

Worse, these lawyers ought to remember that the more money that is thrown at this Goliath vs David case and the longer it goes on, the worse the international and domestic publicity it is likely to engender.  No case brings a certain outcome in court either and Mr Leong ought to be able to bring a persuasive argument that having already been sorted out by Singapore’s executive authorities, on behalf of the prime minister in the name of the government interest, it is inappropriate for him also to be pursued in this way privately.

In short, Mr Leong has been dealt with so why is he still being pursued by someone who has endless publicly funded instruments to protect his own reputation along with that of the government?

At which point this case starts to create unnecessary perceptions, which could turn the whole matter from a situation where objective watchers might sympathise with the maligned PM to a situation where they suspect his motives.

After all, Mr Leong has acknowledged to Sarawak Report that he has long been a persistent critic of the Singapore government: not a libellously so, compared to the anonymously written article, but in an outspoken way over disagreements about how the state is run.

If this case continues, people are likely to suspect that he is being singled out because of his earlier criticism and that to pin this libel on him rather than others more responsible is merely an excuse to silence criticism.

There is also likely to be a suspicion that a second motive for moving against Mr Leong is to intimidate all those on social media generally, as a warning against online criticism against the government in the run up to the next elections.  If such suspicions are engendered they are likely to turn out to be counter-productive to the cause of the ruling party in that election.  People may cringe when threatened, but they are unlikely to vote for the person who threatened them, unless they have to. Najib found that out to his enduring cost earlier this year in Malaysia.

Sarawak Report suggests that this is a classic case where a show of strength can betray a sense of weakness.  A popular prime minister ought not need to target critics in such a way, he would do far better to shrug them off and accept apologies sincerely given.

Sarawak Report suspects the legal team involved in this case have misadvised their client and that the last thing the ruling party needs in the run up to this next election is a martyr in Mr Leong with all the worldwide publicity that is bound to bring.