This was revealed today by the current AG Idrus Harun, in explaining why prosecutors withdrew 46 charges against Musa this morning.

In a statement, Idrus said Gani (above) had issued the affidavit in support of Musa’s application to strike out the charges.

“The former AG defended the decision taken in 2012 to take no further action against Musa as investigation revealed the monies involved were political funding.

Former AG Gani Patail has a close series of family ties with his fellow Sabahan Musa Aman, as previously reported by Sarawak Report.

Did he declare his interest when producing an affidavit on behalf of his relative by marriage? 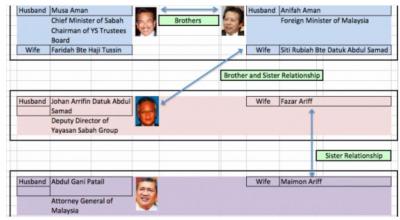