Not Just A Fine But Jail Required! 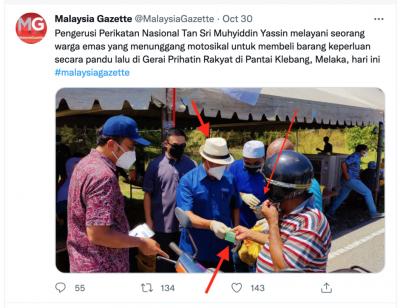 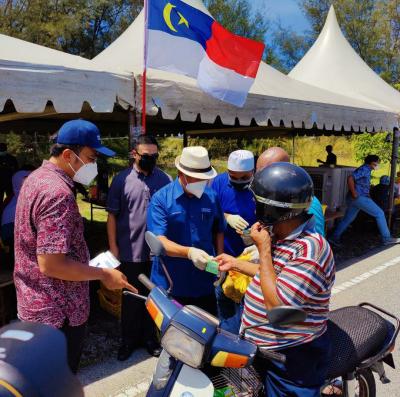 What further shame can the leadership of Malaysia’s fractious Coup Coalition heap upon its people?

Here is the former Prime Minister, Mahiaddin, whose campaign has just been fined together with his rival Najib Razak after the pair of these dirty old men took their electioneering into the Malacca market places at a risk to public health and contrary to their own laws.

So, what is he doing now? According to our own eyes he is handing a RM50* note to a passing voter – described as being a poor old man who is seeking cheap food stuffs. This is a crime on the part of the former prime minister known as electoral bribery and it comes under voter fraud, which in the UK at least would land him with a year in jail.

Perhaps ‘Moo’ has an excuse? Is he paying the motorcyclist for an illegal lift on the back of his bike or for some goods he brought to market?

In which case, how does he explain his crew of assistants one of whom is rifling through to extract another RM50 from a bundle that he appears to be clutching in a plastic holder and the other who is taking apparent notes on the identity of the recipient of this election ‘goody’?

Malaysians ought to take note that these handouts by their appallingly corrupt and embarrassing politicians are not the personal donations of the likes of Muhyiddin, pulled from their own pockets thanks to their fat salaries, but invariably stolen public money filtered into their party machinery for this very purpose amongst many others.

If Moo wishes to correct Sarawak Report on that assumption, then he can do so . Is it fake note handed out for fun? Can he trace the money to his private accounts? In either case, there is a hygiene matter. Once again this two faced PM who kept his people under a pointless and ineffective lockdown for several months is breaking his own rules and threatening public health by handing out grubby notes to people in a market place.

If Malaysia’s corrupted authorities won’t take action the people of Malacca ought – on polling day.

[*Or is this a mere cheapskate RM5 note to buy a vote? Moo is an old guy, BN’s Awang Tengah can tell him how prices have risen.]