Najib Abdul Razak is applying for leave at the Court of Appeal to temporarily release his passport so that he could fly to Singapore to be with his daughter, who is expected to give birth there.

The former prime minister’s counsel Nur Syahirah Hanapiah today confirmed that they filed the application at the Court of Appeal recently.

“That is correct,” the lawyer said when contacted by Malaysiakini today…..

Earlier this morning, the Kuala Lumpur High Court allowed a similar application for Najib’s wife, Rosmah Mansor, for temporary access to her passport, so she could be in Singapore and give mental and moral support to Nooryana Najwa. 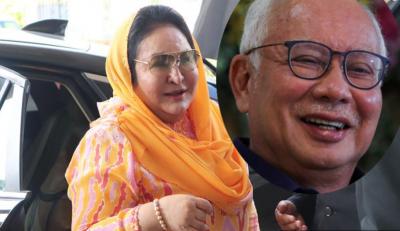 After failing to flee straight after the election (as they were stopped by angry crowds) the couple now seem set to get away thanks to the new coup government.

After months during which every image of Rosmah Mansour would have served well to illustrate a fairy tale involving a wicked witch, the ex-PM’s wife presented a picture today of benign, gleeful elation.

She looked like someone who has just broken out of jail – or the very near threat of it. Which most in Malaysia are pretty sure is now indeed the case.

The reason? Unlike most small time crooks, who languish on remand behind bars for months and years in Malaysia, this woman who stands accused of stealing millions from Sarawak schoolchildren has been offered her passport to travel out of the country on a specious excuse.

Apparently, again unlike other Malaysians, her daughter must give birth in Singapore and her mother must be there. For this reason the court has returned Rosmah’s passport – and interrupted her criminal trial to boot.

Many will conclude that this was the reason that the UMNO/PN coup took place in the first place. Since the return to power of this scandal torn political party (by overturning the democratic vote) all the charged kleptocrats from amongst its ranks have one by one managed to get their prosecutions dropped, delayed or frozen.

By this very same afternoon the convicted Najib had himself put in his own petition to the court on the exact same grounds.  He too must be in Singapore to hold his daughter’s hand as she produces her second child – passport please, now that we have the precedent!

After all, Najib has already seen his appeal put on permafrost (in the very manner that the former PM Mahiaddin openly predicted that the judiciary could be influenced). As everyone knows a similar petition exists for Najib’s ex-deputy, Zahid Hamidi, whose ‘bad neck’ can only be attended to in Germany, despite the jaw-dropping list of charges he is facing in Malaysia.

Call Malaysians cynics, but they only expect to see these fellows back from their foreign trips if the decline of law and order under UMNO descends even further – to the extent that such crony criminals would feel secure to swan around free despite the devastating crimes they stand accused of.

This they know is entirely possible, because if these two birds fly the coup it will leave the present majority of five government even more exposed than it already is – MOU or no MOU. Therefore, citizens should prepare for dozens more charges to be dropped whilst these brave MPs are waiting it out in hospitals abroad, in order that they can return to vote free men!