Who Did Zafrul Forget To Thank over KPMG?

“The recent political developments have not affected the government’s determination to ensure that appropriate actions are taken against all individuals or entities involved, directly or indirectly, in the global 1MDB scheme,” he said.

The ministry said the settlement will conclude the civil suit filed on July 6 against KPMG, which will expedite the payment of monies to fulfil 1MDB’s outstanding obligations, and save the court’s time and public resources.

It said this settlement will not affect or compromise the government’s claims against individuals like Jho Low and other parties related thereto, and who are still being actively pursued in relation to the 1MDB financial scandal.

The Finance Ministry concluded the statement by thanking the Attorney-General’s Chambers and all the regulatory bodies and enforcement agencies for their efforts in achieving this settlement. 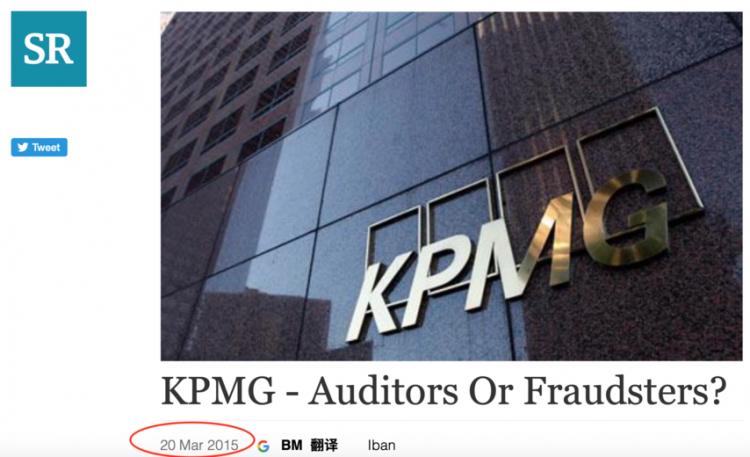 The unelected royal pal, finance minister Zafrul, has been assiduous together with various PN lawyers in getting as much money as he can out of easy local targets over 1MDB.

More embarrassing but larger entities responsible, such as the royal family of Abu Dhabi, have meanwhile been let off the hook. However, billions have been garnered from the efforts of the United States and others to return the stolen money to Malaysia.

Less clear has been what has actually happened to such deliciously accessible dollops of hard currency, which were supposed to go straight back into paying off 1MDB’s terrifying debts. There has been no report on the matter thanks to the convenient (and unnecessary) shutting down of parliament and all forms of public oversight and scrutiny since PN grabbed office.

Any bets that the debts remain exactly as they were and growing and the money now unaccounted for? Zafrul owes the country a full and proper audit of how this returned money has been employed.

Meanwhile, should this fellow have the slightest manners, there are further thanks he owes besides those he made to the officers regarding the cave in by KPMG Malaysia, namely to this site.

So far, Sarawak Report, which was the first to publish the facts on KPMG’s failings over 1MDB, its dodgy accounting on the matter and indeed the whole scandal of 1MDB has yet to receive a word of thanks from anyone in this PN government who have been so happy to grab the billions returned as a result of our reports.

To the contrary, for years all these characters accused us of lying as we reported 1MDB…. right up to the day the money started coming back and they snatched office to receive it.

Zaifrul’s PN allies, such as the chief crook in the story Najib Razak, swan around KL and Parliament, convicted but still key members of the coup regime. They have even appointed Najib as a key economic advisor … seemingly to educate Zaifrul on how to steal more and raise more debts.

By contrast, Sarawak Report, has made do with a series of arrest warrants, civil suits by public figures, slurs and lies. We take it as a badge of honour as the Datuks of PN grab for the dirty money and let each other off their jail sentences.