Speakers' Corner: Occasional contributions from readers, which do not necessarily reflect the views of Sarawak Report but may be published at the discretion of the site. 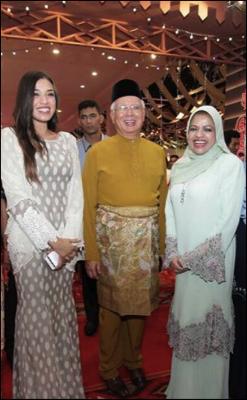 In order to seek the RM253.6 million still owed to Malaysian taxpayers, on February 13 the Malaysian High Court summoned the former BN-led Minister of Women and Family Shahrizat Jalil and her family to court for trial.

In fact, the Salleh family’s NFC ‘Cowgate’ scandal was so unethical, that today they are used in international business schools as a literal textbook case study on poor ethical corporate leadership. Tellingly, the Malaysian Auditor-General initially described the NFC project as “a mess” in 2010, revealing that despite their RM 253.6 million loan, amazingly, the Sallehs had achieved only 41 percent of its target of 8,000 heads of cattle for the year. As a result, in 2014 the Salleh family was prosecuted in court on four counts of misappropriating funds. However, with the maneuvering of the disgraced ex-prime minister Najib Razak’s lawyer Shafee Abdullah, the Salleh family managed to be prematurely cleared in court in 2015—an obnoxious miscarriage of justice.

But in February 2018, investigative journalists discovered that “no cows and no workers were spotted at the 600-ha NFC site in Gemas, Negri Sembilan, where RM250 million in public funds were sunk into a project that has since been left to rot.” Finally, last May, the Finance Ministry announced its decision to seek the family’s full repayment of NFC’s outstanding loan amount of over RM253.6 million still owed. This week, the Salleh family is again under prosecution in court until this Thursday.

What is Shahrizat’s nightmare scenario? Red-alert warning signs already indicate that her whole family, including her children, could finally be convicted for the NFC scandal this year. For instance, the Salleh family’s most laughable recent misadventure is their failed July 2019 attempt to sue Public Bank for “not protecting their bank account confidentiality” when the whistleblowers Rafizi Ramli and Johari Mohamed discovered and revealed the family’s misuse of funds. In response, the High Court judge not only rejected the Sallehs’ plaintiff bid, but also ordered the clueless family to pay costs of RM350,000 to Public Bank. Following this humiliation, last November Rafizi was successfullu acquitted by a separate High Court judge for whistleblowing the Sallehs’ misuse of funds. This High Court judge also openly scolded the Salleh family for failing to produce the original documents used as evidence in the trial.

Writing, meet wall: None of these recent court decisions look positive for the Salleh family, whose main claim to fame was providing ‘meat promoter’ jobs that only paid about RM600-1000 a month. Instead of strategically scaling the assets required to successfully grow a cattle export business for the food security of Malaysia, the Sallehs have forever left their ignominious stain on Malaysia’s history as some of the country’s most fraudulent crooks.

Another nightmare scenario for Shahrizat is that in contrast to the original 2014 trial, the prosecution will finally compel the three sibling company directors Izmir, Izran, and Izzana Salleh to answer some uncomfortable yet important questions.

For example, in her bio, the callow Izzana Salleh ludicrously claims that her leadership of NFC “showed great growth and profitability within the Malaysian food industry,” which is a hilariously avoidant way of saying that she was NFC’s official company director during the Cowgate scandal. Therefore, in this week’s cross-examination, the prosecution might ask Izzana to explain how she was caught red-handed with excessive credit card spending from the NFC accounts in excess of RM127,000, averaging around RM10,000 a month. (“All that I am, or that I hope to be, I owe it all to my angel mother,” she writes on her Instagram page.)

Shahrizat retired immediately after BN spectacularly lost the 2018 general election (following her own humiliating landslide election loss in 2013), but if the apple doesn’t fall far from the tree, then the three Salleh siblings will inevitably try to publicly complain that the 2020 court summons is “Pakatan political revenge” against their family—all of whom are registered UMNO party members.

However, the Sallehs still have much to explain about other under-scrutinised aspects of the NFC Cowgate scandal. For example, important questions should be probably asked about the siblings’ now-defunct Meatworks Restaurant in Mont Kiara, which received such dreadful customer reviews that it eventually aborted and closed. The vast majority of Meatworks customers’ restaurant reviews were overwhelmingly negative: “Lousy service and lousy meal,” “Don’t even try,” Who knew you could screw up a chicken nugget?” and other customer complaints paint a disturbing picture of the business during its brief, hapless life. (When a customer politely complained to a Meatworks restaurant waitress that her RM55 beef ‘smelled like cockroaches’, a restaurant supervisor apparently ‘shoved’ the meat back in her face, then charged her anyway.)

The Sallehs are a truly awful family, of course – the filial face of the elite capture of public goods, who stole opportunities from rural Malaysians, then flew off with the money (and abandoned the poor cows to boot). However, regardless of all the miserable and apparently horrible-tasting beef they gave to the nation, the Salleh family should be given a fair court trial this week.

The Salleh family’s series of scandals are astoundingly craven. But this week, the rule of law must prevail.

Corruption Watch is a reader of Sarawak Report.