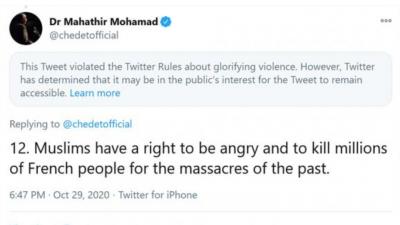 “However, Twitter has determined that it may be in the public’s interest for the Tweet to remain accessible.”

The offending tweet was part of a series of tweets by the Langkawi MP, which contains the same content as Mahathir’s blog post regarding French President Emmanuel Macron.

Many Twitter users expressed alarm and condemnation over Point 12 of Mahathir’s post, where he said, “Muslims have a right to be angry and to kill millions of French people for the massacres of the past.”

Points 1. – 12. of the lecture by Malaysia’s former PM, which appears to seek to justify the recent spate of beheadings (including an innocent woman attending church) in the name of religion in the streets of France, are not a recommendation for his desire to return yet again to the helm as PM9.

This list from an opinionated, offensive and outspoken old politician, who nonetheless seeks to silence the views of others, is perhaps best answered by a shorter list of well known proverbs:

2. Two wrongs do not make a right.

3. Sticks and stones may break ones bones, but words will never hurt me.

5. Blessed are the peacemakers.

Malaysians needs a leader who will not embarrass them after all the country’s been through.