Foolish Fall Guy Or Financial Mentor - It's Either Or! 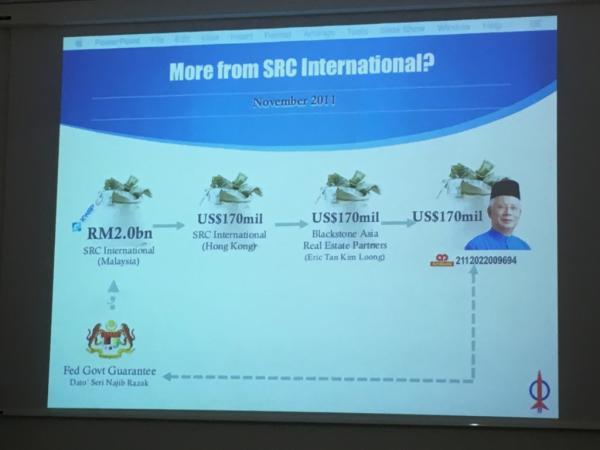 If former prime minister Najib Razak really was the mastermind behind the theft of 1MDB-linked billions, why has only a miniscule fraction of the stolen money been linked to him?

He writes that the RM42 million found in Najib’s personal bank account that supposedly belonged to SRC international amounted to “only about 0.22% of the US$4.5 billion (RM18.6 billion) that US prosecutors say was supposedly looted from 1MDB” and reasons that “it must be that the remaining 99.8% of monies allegedly looted from 1MDB went to the actual mastermind and his accomplices”.

Bose questions whether a more likely explanation would be that Najib was made the fall guy in a complex plot to rob the state investment agency, with those truly responsible paying off officials to keep the prime minister in the dark and planting the RM42 million so that if the plan fell apart, “it would be Najib left holding the bag”….

“I am certain he will triumph in the end. His enemies should be afraid. I would be.”

Penguin Books have ducked and dived, refusing to answer journalists who have enquired as to why the once proud publishing house has shamefully backed this apologist book on behalf of the world’s most notorious convicted kleptocrat.

The writer of the book, who himself received stolen money from 1MDB for his role as Najib’s communications guru, takes his opportunity to repeat the ridiculous claim that Najib was a patsy who was duped into receiving millions into his own accounts, whilst at the same time promoting his boss as the financial mentor to the nation.

He then directly threatens those whom Najib regards as his enemies to “be afraid” because the convicted criminal is bound to return to highest office. In their position, says Bose, he would be.

Such dark statements can but draw the minds of critics and most Malaysians back in the direction of episodes that remain unsatisfactorily unresolved whilst linked to Najib, such as the death of Altantuya and other episodes where the motive for murder have remained unclear for those convicted. Now there’s the true meaning of being a fall guy.

Meanwhile, Bose continues the theme of having one’s cake and eating it, as he follows his ‘bossku’s’ other tactic of admitting whilst at the same time denying that Najib did take the SRC cash by claiming that it such a small amount it didn’t count.

So far, Najib has ‘only’ been convicted of stealing RM42 million after all. Bose points out in his fawning narrative that this was only a small proportion of the whopping RM4 billion of public cash that Najib caused to be siphoned out through the fund before being lost.

So, argues Bose, why make such a fuss about ‘peanuts’? For the high and mighty Najib we are talking petty cash. That jail is good enough for small people who steal really small sums by comparison to this does not occur to Bose any more than to his paymaster [did they pay Penguin to publish this book? Penguin won’t answer, so we don’t know].

However, Bose’s arguments weak as they are are weakened further by the facts that he has chosen to ignore. So far, Najib has been convicted merely on a fraction of the crimes with which he has been charged.

By minimising the significance of a ‘mere RM42 million’ the con-job PM is plainly hoping to make his “triumphant return” before the chickens come home to roost in court regarding the rather larger sums, namely billions, that he is charged with looting.

Naturally, in his dreams of returning as PM10 Najib’s first move will be to order the dropping of all such prosecutions that are presently in the process of revealing ever more damning evidence of his crimes. Bose will then join lawyer Shafee in the ruling Pantheon of Najib’s most loyal advisors to ruin the country.

Wake up. The SRC convictions over the RM42 million related only to cash that was never exported from Malaysia which therefore presented local prosecutors with a relatively simple case to ‘swiftly’ convict their errant ex-PM (it has taken a mere three years so far, which represents lightening speed for the Malaysian courts when it comes to cases against the powerful such as him).

Under Najib’s instructions the vast majority of SRC cash was swiftly send abroad on spurious grounds and ‘lost’. At the same time, Najib’s protege Jho Low was dabbling in the purchase of his own strategic resources using a company with an eerily similar name to SRC!

But, what else happened to that exported RM4 billion raised after Najib had bullied KWAP to lend it and the Cabinet to guarantee the money? Well, as the later court cases and convictions are due to remind the public once these more complex matters have ground their way through the glacial courts, an awful lot of it also found its way back into Najib’s personal accounts in KL. A great deal more than RM42 million!

Long before the 1MDB bond money was flushing into Najib’s 2112022009694 dollar account at AmBank KL, a whopping USD170 million had arrived in November 2011. This was just a couple of months after the first RM2 billion draw down by SRC from KWAP took place in August at which point a lion’s share of the cash had been sent to SRC’s ‘International Account’ at Julius Baer bank in Hong Kong where it was held in dollars.

USD170 million represented around RM800 million – almost half the total cash raised through that borrowing from KWAP, which Najib had caused his government to underwrite. It went from Julius Baer, via the Jho Low owned bogus Blackstone offshore subsidiary (Blackstone Real Estate Asia Parters BVI) and into Najib’s KL dollar account.

Does Bose think Najib was duped into receiving this? Does he think that Najib was likewise deceived by Jho Low into thinking this was yet more of the ‘Saudi Royal Donation’ money, supposedly later provided in March 2013?  It won’t be the first time Najib will have confused his dates, as the Appeal Court judges pointed out last week. Najib was also seeking to claim he was deceived in this way in 2014/15 into believing he was receiving the same donation money when the RM42 million came locally through SRC. This was a year after he was claiming to have sent the money back.

Bose seems to be expecting Malaysians to regard a man whose excuse for monies received in 2011 and then 2014 is that he thought it came from a donation he claimed to have both received and then returned in 2013 as both an innocent dupe and a financial advisor to the nation.

With regard to the fallback argument that RM42 million is relative peanuts. Even Bose cannot claim the same for the RM800 million that was likewise earlier stolen from SRC only to pop up in Najib’s account can he?

All this is due to re-emerge to remind Najib’s followers (whoever they might be) that he is a massive kleptocrat who tells massive lies. Sarawak Report assumes this makes it one of Najib’s enemies and we register Bose’s warning, published by Penguin Books, that the editor should therefore ‘be afraid’.